The inland water bodies which are used for culture and culture-based fisheries are detailed hereunder.

There are innumerable ponds and tanks of different size, both perennial and seasonal. With the rapid development of aquaculture in the last two decades, the ponds have been increasing tremendously. Not only the waste and low-lying lands but also the vast tracts of agricultural land are being converted to myriads of fish ponds. The area under ponds and tanks available for freshwater aquaculture in India has been estimated at 2.85 m ha. Ponds and tanks are more numerous in West Bengal, Andhra Pradesh, Bihar, Orissa and Tamilnadu. The ponds offer scope for enhanced productivity through semi-intensive and intensive aquacultural practices. Indian freshwater aquaculture has evolved from the stage of a domestic activity in West Bengal and Orissa to that of an industry in recent years, with states like Andhra Pradesh, Haryana, Maharashtra, etc., taking up fish culture as a trade. With technological inputs, entrepreneurial initiatives and financial investments, pond productivity has gone up from 600-800 kg/ha/yr to over 8-10 tonnes/ ha/year. While carps (Indian and exotic) are the main species cultured in ponds, others like catfishes, murrels, freshwater prawns and molluscs for pearl culture are also being cultured in ponds.

In India an estimated 0.6 million ha of water remains unutilized for fish production. This is in the form of marshes and swamps alone. Reclamation of such swamps into fish ponds is recognized as an effective means of making them productive but difficult for fish culture from production standpoint. However, these can be made productive with the introduction of cage-culture of air breathing fishes. The success is largely due to the fact that the two main obstacles of swamp can be overcome by this. Cage culture precludes all risks of cultured fish being lost during harvesting in these weed infested waters. Secondly, selection of air-breathing species of fish eliminates the danger of mass kill under conditions of deoxygenation. A number of air-breathing fishes are indigenous to our waters, and many of these are popular as food fishes among the Indians. The important ones are: magur (Clarias batrachus), singhi (Heteropneustes fossilis), koi (Anabas testudineus), murrel (Ophiocephalus (=Channa) spp.) and chital (Notopterus spp). An exotic fish, gourami (Osphronemus gorami) is also equally valuable for cultivation in swamps.

Reservoirs are defined as “man-made impoundments created by erecting a dam of any description on a river, stream or any water course to obstruct the surface flow”. . However, water bodies less than 10 ha in area have been excluded from this definition. The Ministry of Agriculture, Government of India classified reservoirs as small (<1000 ha), medium (1000 to 5000 ha) and large (>5000 ha) for the purpose of fishery management. Reservoirs constitute the single largest inland fisheries resource in terms of resource size and production potential. It has been estimated that India has 19,134 small reservoirs with a total water surface area of 1,485,557 ha, 180 medium reservoirs with 527,541 ha and 56 large reservoirs with 1,140,268 ha. Thus, the country has 19,370 reservoirs covering 3,153,366 ha.

The medium and large reservoirs are predominantly capture systems. Although many of them are stocked, their fisheries continue to depend, to a large extent on the wild or naturalized fish stock. Conversely, small reservoirs are managed as culture-based fisheries, where the fish catch depends on stocking. More than 70% of the small reservoirs in India are small irrigation impoundments created to store stream water for irrigation. They either dry up completely or retain very little water during summer, thus ruling out any possibility of retaining broodstock for recruitment. Thus, culture-based fishery is the most appropriate management option for the small reservoirs in India. The key management parameters of culture-based fishery are species selection, stocking and environmental enhancement (enriching the water quality through artificial eutrophication).

Today, most of the states being capable of producing carp seed through hypophysation and the culture-based fisheries of small reservoirs in India largely center round the three species of Indian major carps viz., Catla catla, Labeo rohita and Cirrhinus mrigala. The Indian major carps have an impressive growth rate and their feeding habits are suitable for utilization of various food niches. In addition, the stocking of many exotic species (Tilapia, common carp, silver carp, grass carp) have also contributed substantially to commercial fisheries. The other groups having countrywide distribution are the catfishes, featherbacks, air-breathing fishes and the minnows.

The floodplains are either permanent or temporary water bodies associated with rivers that constantly shift their beds especially in the potamon regimes. The Ramsar Convention defines wetlands as “areas of marsh, fen, peat land or water, whether natural or artificial, permanent or temporary, with water which is static or flowing; fresh, brackish or salt including areas of marine waters, the depth of which at low tide does not exceed nine.meters”.

The beels, or floodplain wetlands usually represent the lentic component of floodplains viz., ox-bow lakes, sloughs, meander scroll depressions, residual channels and the back swamps and excludes the lotic component (the main river channels, the levee region and the flats). In addition, tectonic depressions located in river basins are also included under beels. Thus, all the wetland formations located at the floodplains can be termed as floodplain wetlands (beels). They are either shallow depressions or dead riverbeds generally connected to the principal rivers and/or receive backflow water from the rivers during floods or from the huge catchment area following monsoon rains.

Beels offer tremendous scope for expanding both capture and culture fisheries. They have high biological productivity. However, in many beels, the nutrients are usually locked up in the form of large aquatic plants like water hyacinth, and do not contribute significantly to fish production. The beels are considered as biologically sensitive habitats as they play a vital role in the recruitment of fish populations in the riverine ecosystem and provide excellent nursery grounds for several fish species, besides a host of other fauna and flora. The beels also provide an ideal habitat for pen and cage culture operations. If managed along scientific lines, fish production in beels can be increased significantly.

Beels are of two types viz., closed and open beels based on the water residence and renewal time as well as the extent of macrophyte infestation. The open beels are those which retain their riverine connection for a reasonably long time and relatively free from weed infestations. The management strategy is essentially akin to riverine capture fisheries. The closed beels are those with a very briefperiodof connection with the river is more like small reservoirs. The basic strategy here will be stocking and recapture offish i.e. culture-based fishery.

Beels are systems, which combine the norms of capture and culture fisheries. The marginal areas of beels are cordoned off for culture systems either as ponds or as pens and the central portion is left for capture fisheries (Fig. 1-1). Beels can also be part of an integrated system including navigation, bird sanctuary, post harvest, aquaculture and open water fisheries. A proposed scheme of closed beel (Fig. 1-1 has been shown as an example. This plan is a part of holistic development of the wetland, which can benefit the local people and help retaining the biodiversity of the beel and its environment. Pen and cage culture of fish and prawn is a very useful option for yield enhancement in beels especially those infested with weeds. Pens are barricades erected on the periphery of beels to cordon off a portion of the water body to keep captive stock of fish and prawn. Pen culture offers scope for utilizing all available water resources, optimal utilization offish food organisms for growth and complete harvest of the stock. Pen culture involving major carps has indicated a production possibility upto 4 t/ha in 6 months from a ‘maun’ in Gandak basin while production varying from 1.9 to 4.8 kg have been obtained from 2 sq.km cages in 90 days from a weed choked Assam beels by rearing air-breathing fishes, Glorias batrachus and Heteropneustes fossilis.

Beels are the ideal water bodies for practising culture-based fisheries for many reasons. Firstly, they are very rich in nutrients and fish food organisms, which enable the stocked fishes to grow faster to support a fishery. Thus, the growth is achieved at a faster rate compared to reservoirs. Secondly, the beels allow higher stocking density by virtue of their better growth performance and high yield. Thirdly, there are no irrigation canals and spill ways as in the case of small reservoirs which cause the stock loss, and the lack of effective river connection prevents entry of unwanted stock. The beels also allow stocking of detrivores as the energy transfer takes place through the detritus chain. 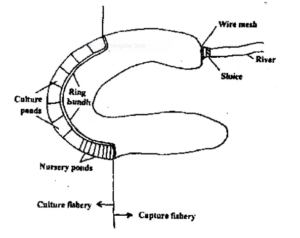 Fish is a rich source of animal protein and its culture is an efficient protein food production system from aquatic environment.

Natural resources can be used as culture systems and organisms to be cultured are stocked in the water body. Capital expenses are low for the open culture systems. Cages, long lines, floats, rafts, trays and clam beds are examples of open system techniques.

In semi-closed culture systems, water is taken from natural sources or ground water and is directed into specially designed ponds and race ways.

In closed culture systems, no water is exchanged and the water is subjected to extensive treatment.Fish or prawn culture in water recirculation systems is good example for closed systems.