Aquaculture Spectrum, the voice of the Indian Aquaculture Industry was officially launched during the Aqua India 2018, the 9th in the series of Seminars conducted by the Society of Aquaculture Professionals at Chennai on the 3rd February 2018. Mr. Jaideep Kumar, the editor and Dr. P.E. Cheran, the co-editor of the magazine handed over a copy to Mr. Srinivas, Ex-President of SAP Dr. E. G. Silas receiving the first copy from Mr. Jaideep, Editor and the Director of Poseidon Group of companies. Earlier, the first copy of the Magazine was handed over to Dr. E.G. Silas, Former Vice Chancellor, Kerala Agricultural University and Former Director, Central Marine Fisheries Research Institute at his residence on the 31st January 2018. The first official subscriber of Aquaculture Spectrum was Shri. K. M. Niranjan from Hubli, Karnataka, who subscribed the magazine for a period of three years. 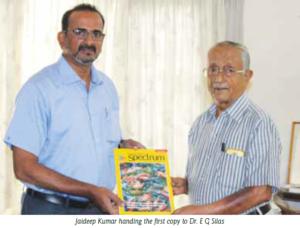 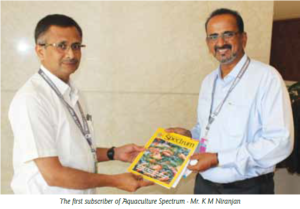