livebearers are generally smaller in size with attractive colours and possess a sexual organ, gonopodium, to accomplish internal fertilization. The gonopodium is the modification of the anal fin and is used for the transfer of sperms to the females. The young ones develop from the eggs and hatch inside the mother’s body. They are then released live. Breeding of livebearers is easy and also provides challenges for more serious aquarists. New colour pattern, fancy fin varieties are available every now and then and these are the efforts of dedicated aquarists. There are some very beautiful varieties of wild livebearers, but there are so many cultivated varieties that are very popular in the trade. Through selective breeding their colours and fin shapes have been altered to create some fancy effects. Most livebearers are schooling fish, so it can be kept more than one of each species. It is also very important to have at least three females for a male. A large densely planted aquarium is ideal for them. They accept all types of foods. The water condition should be medium hard to hard with a pH ranging from 7.0 to 7.8. 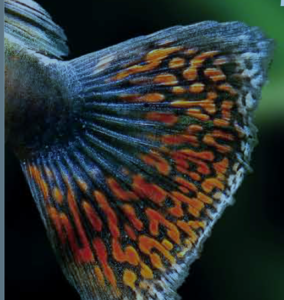 Among tropical fishes, the guppy, Poecilia reticulata, is considered to be the most popular as they are beautiful, easy to breed and maintain, even for a beginner in the hobby. They are also known as millions fish as they are prolific breeders. The colour pattern shows considerable variations. Depending on the variations in the tail fins, they are known as round tail, spear tail, fan tail, veil tail, pin tail etc. Guppies are able to tolerate crowding, accept wide fluctuations in temperature, water hardness, pH and salinity and are not so expensive. They show sexual dimorphism. Males are brightly and stunningly coloured. In 1866, Rev Robert Guppy was the first person to genetically produce new variations of this tiny fish found in Trinidadian streams. As a result of hybridization among different varieties and selective breeding, No two males appear to have exactly the same markings and it is this extreme variability of colour and finnage that is responsible for selective breeding. The ideal temperature for breeding ranges from 23.5 to 25.5oC with medium hard to very hard and alkaline water with pH ranging from 7.0 to 8.5. Depending on the temperature of the water, the female can reproduce every 25-90 days, generally higher the temperature, the faster the rate the female matures the eggs. On an average, 10-25 fry will be produced initially and as the female matures the number of fry can be ranged from 40 to 100 in a healthy female, They are omnivorous and will take small live and frozen foods and also flake foods. There are over 40 varieties of guppies being marketed at present. Originating from Central America to Brazil and West Indies, they are commonly termed rainbow fish due to the numerous colour patterns on their tail and body. 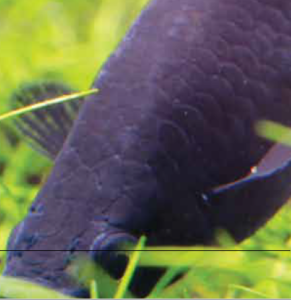 Black molly, Poecilia sphenops, is a native of Central America, from Mexico to Columbia, sail fin Molly (P latipinna) is from Southeastern North America, from the Carolinas through the Gulf coast of Southern Mexico while Lyre tail Molly (P. velifera) is found in the streams of Southern Mexico. Molly is very familiar fish in the aquarium. It can tolerate extreme conditions of temperature and salinity. In black molly, the body is elongated with slender belly in males and females with a very round belly profile. Males are smaller than female. The general body form of sail fin molly is moderately elongated with lateral compression. In sail fin molly the dorsal fin of male is enlarged and looks like a sail- hence the name sail fin molly. In some, the caudal fin is crescent shaped and is called as lyre tail or moon tail. Lyre tail is similar to P latipinna with the major difference being the marking on the dorsal fin where it is small, round light spots in lyretail while it is dark and rectangular in sailfin molly. 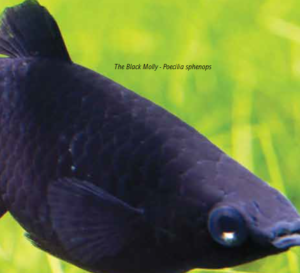 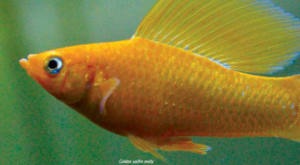 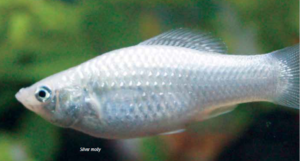 Black molly has several subspecies and colour variations. In classic black molly, where black is usually olive brown and sides may be silvery with a green or blue luster marked with a series of brown or orange spots. Lyre tail varieties also come in black colour. In sail fin molly the dorsal side of male is dark greenish brown changing on the sides to a blue luster with whitish markings on the belly. The sides are marked with a series of stripes with red, green or blue spots. The dorsal fins light blue with black-blue dots and streaks with the upper margin being orange. Orange-red caudal fin is with dots similar to the dorsal fin. With sides being blue-green with iridescent greenish, silver or light blue dots, lyre tail molly is one of the most beautiful fish. Between the dots, there are dark blue to copper coloured bands that extent all the way to the caudal fin. The belly is also bluish, green or orange. The dorsal and caudal fins are marked pearly spots that are edged in orange, brown or black. The female lyre tail molly is similar to male but is less colourful.

Hybrids have black and grey mixed colours with dotted patches, known as marble molly. They are also found in numerous colour patterns, golden sail fin with bright orange spots to variegated with brownish orange background with silver spots etc. Currently, about 25 strains of molly are being cultured and traded in the market along with the well-known black molly. Most of the mollies cultured today are the hybrids between two species and have exotic names like gold dust, starburst, copper topaz, opal etc. The molly is very hardy and can withstand many adverse conditions. However, they are not as popular as other livebearers. Well grown matured females will produce 20 to 50 young ones during each breeding. The ideal water temperature for breeding is 21 to 26oC with pH ranging from 7.0 – 8.5 and hardness ranging between 20.0 – 35.00 dH. They prefer to have a little sea salt in their water, one teaspoon in twenty liters of water as they are originally from the coastal areas.

Originating in Central America from Mexico to Guatemala, Platy (Xiphophorous maculatus) looks similar to their cousins, swordtail, but are smaller and grow up to 4 cm long. With many colour variations ranging from red, black, blue, golden and salt and pepper mixed colours, Some specimens are elongated with both dorsal and ventral profiles slightly curved out or convex, but mostly they are thick bodied with a high back. They are hardy, peaceful and are available in a wide variety of colour patterns and fin varieties

The wild –type platy has a definite black crescent-moon pattern in the caudal peduncle. Wild form is a plain grayish brown to olive colour. Many wild varieties have been cross bred and combined to give rare colours and fin shapes. The different varieties that are popular in the market include red-wag-tail platy, tuxedo platy and many variations with high fin. Like the swordtail, the platy also lives in similar environmental and water conditions but prefers stretches of water in their natural habitat. The swordtail and platy hybridize easily and hence have numerous colour and fin patterns. Males are brightly coloured, smaller and possess conspicuous gonopodium. Gravid females when left in separate tank will release 10 to 15 young ones of about 5-6 mm length. The ideal water temperature ranges from 20.5 to 25.5oC with pH 7.0 – 8.3 and hardness medium ranging from dH 10. – 28. 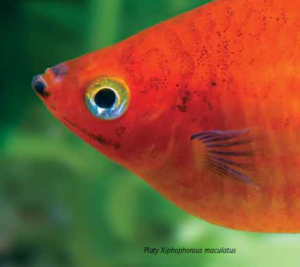 Among livebearers, the swordtail (Xiphophorus helleri) is more attractive after guppy. With elongated lower tail fin rays to form a sword-like projection in the male, swordtails are a favourite and colourful addition to the aquarium. The lower portion of the tail fin of male is generally drawn out into a sword-like spike, giving the name sword tail, while females will have normal fins. There has been cross breeding within the family to produce many different colour and fin shapes. In some, both upper and lower portions of the tail fin are drawn out in a crescent shape and hence called moon–tail sword tails. Though swordtails originated from the freshwater basins of Mexico and Honduras, there has been considerable hybridization among the species and varieties domesticated by hobbyists. Wild swordtails were introduced into the USA a century ago and into Asia about 50 years ago.

While the wild swordtail has a greenish-silver sheen with a hyaline tail with greenish tinge, the aquarium varieties are bright red and wag-tailed. They are easily cared fish and go well with all types of community fishes. Three fin shapes which exist in the sword tail are lyre tail, high fin and veil tail with numerous colour patterns from blood-red sword tail with solid red body to gold with xanthic body colour. The ideal water parameters are temperature ranging from 21-28oC with pH 7-8 and medium hard to hard, 10-30 dH. Although there is no special skill required to breed livebearers, maintaining pure strains and developing new varieties can be achieved only through very careful selective breeding. The fact that they breed at short intervals makes itmore interesting to hobbyists and breeders as they can produce more generations in a shorter period of time. However, only dedication, consistent monitoring, careful selection and documentation will yield good results.