An awareness programme on ‘Fishing capacity management of trawl fishery’ was conducted on 28 March, 2018 at Cochin Fisheries Harbour by the Central Institute of Fisheries Technology (CIFT). The programme was conducted as a part of the institute project titled, ‘Modelling studies for estimation of revenue based capacity and valuation of selected fishing systems and fish supply chain analysis’. The participants were given insight on different topics such as the Plastic menace and its ill effects at sea’ and as well as the technological intervention to reduce the hazard. An onsite demonstration on collection of waste from the sea and bringing back to shore using net bag was also conducted to inculcate responsible fishing practices among the trawl boat operators.

The Central Institute of Freshwater Aquaculture (CIFA) under its Tribal Sub-Plan Programme conducted the Tribal School Students’ Meet on “Fish as Health Food” at Gram Vikas School, Odisha on 24 March, 2018. The objective of the programme was to create awareness among the tribal population on the goodness of fish as a cheap animal protein source.

The event highlighted on the role of fish culture for livelihood development and nutritional security of tribal population of the country. A leaflet on “Fish as Health Food” in Odisha language was released during the event. 416 students from four schools in and around the Ganjam District, Odisha actively participated in the programme.

The Secretary, Department of Agricultural Research Education and Director General, ICAR Dr. Trilochan Mohapatra assured Seafood Export Association (SEA) regarding the setting up of referral laboratory for fish testing at the Veraval Research Centre (VRC) of the Central Institute of Fisheries Technology (CIFT). He informed that the laboratory will be completed at the earliest possible. The Secretary gave this statement during his visit to the (VRC) of the Central Institute of Fisheries Technology (CIFT) and the Central Marine Fisheries Research Institute (CMFRI) on 7th April, 2018. During his visit he reviewed the research activities of the organizations and also held a meeting with the stakeholders from Seafood Export Association (SEA), Boat Owners’ Association, Krishi Vigyan Kendra and fishermen community.

CIFT TO CONDUCT TRAINING ON MICROBIOLOGICAL EXAMINATION OF SEAFOOD

The Central Institute of Fisheries Technology (CIFT), Kochi is organizing a training programme on microbiological examination of sea foods from 7th to 19th May 2018. The programme focusses on providing detailed information on the types of seafood borne pathogens, basic and microbiological techniques to screen the samples for pathogens, conventional and rapid methods of identification. The course is tailored for laboratory technicians, post graduates, seafood technologists and microbiologists.

The Central Institute of Fisheries Technology (CIFT), Cochin supported a start- up firm M/s. Aabbaa Fish Products, Cochin to establish a business model for solar dried fish products. The dry fish store which is unique in its design and products was opened on 10th April, 2018 at Kochi, Kerala. The store suits the new age retailing business, and is the first of its kind in the state. The products sold by the store are scientifically processed using the energy efficient and eco-friendly solar dryers developed by the CIFT. The quality of the solar dried fish is extremely good in terms of hygiene, retention of nutrients, aroma and taste, as it eliminates all the disadvantages of conventional open sun drying, and is free from attack of dust, dirt, rain, insects and microbes. 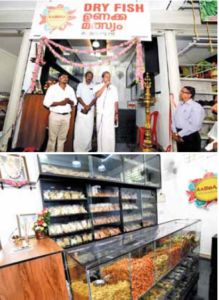 Skill development training program on Inland Fisheries Management and Development was conducted by CIFRI from 31st March to 3rd April, 2018 at Alipurduar, West Bengal. The programme highlighted the importance of skill development of the farmers on various aspects of inland fisheries management for securing their livelihood. It stressed the role of skill development for developing nutri-smart villages through aquaculture and fisheries. The event was further oriented encompassing the practical skill of the farmers for enhancing the fish production in open waters viz., mauns, chaurs, ponds & tanks etc. through field exposure visits, demonstrations and class room sessions. 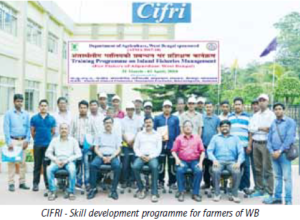 The Waterbase Ltd., one of the pioneering Indian companies that manufactures high-quality shrimp feed signed a Memorandum of Understanding (MoU) with the Central Institute of Brackishwater Aquaculture (CIBA) on 10th April’18, at the Thapar House, New Delhi in the presence of Dr. Pravin Puthran, ADG, ICAR, (Marine Fisheries), Dr K. K. Vijayan, Director, CIBA; Mr Varun Thapar, Director, and Mr. Ramakanth V. Akula, CEO of The Waterbase Limited company for a collaborative programme on eco-friendly shrimp feed technology. The signed agreement involved the exchange of information on feed formulations containing macro and micro-nutritional parameters, feed processing, and testing of identified feed ingredients and finished feeds. As per the MoU, CIBA will provide its expertise in testing finished feeds in experimental ponds of CIBA, at the Waterbase company farms, farmers’ ponds, and subsequently to the shrimp farming sector. Any required specific changes in feed ingredients, inclusion level, feed standards, additives, processing technology to achieve the desired performance would also be advised by the scientists from CIBA. 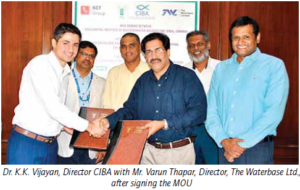 An awareness programme on ‘Fisheries enhancements in derelict water bodies’ for tribal farmers of Goalpara district, Assam was organized by the Central Inland Fisheries Research Institute, Regional Centre, Guwahati in collaboration with the Rubber Board, Guwahati at Daranggiri, Assam on March 28, 2018. The programme was organized with an objective of enhancing fish production in derelict water bodies lying unutilized within rubber production areas of Goalpara district, Assam. The importance of integrated farming system and the usage of seeds of rubber plants as fish manure were emphasized during the event to the tribal farming communities. 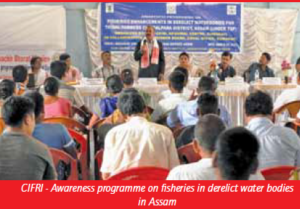 A training programme was conducted by the Central Inland Fisheries Research Institute for the benefit of officials of the Department of Fisheries (DoF), Chattisgarh on 9th April, 2018 at CIFRI, Barrackpore. It emphasized on the importance of Inland fisheries management with special emphasis on reservoir fisheries. While inaugurating the programme, Dr. B.K Das, Director CIFRI, opined that such programmes are vital to secure the livelihood of the farmers thriving in the fisheries sector besides eradicating mal nutrition of rural India. Field exposure visits, field demonstrations and in-house class interactions with the scientists of CIFRI were organized as a part of the programme. Dr. Das urged the officials of the Department of Fisheries to utilize the knowledge gained during the training period at CIFRI in the water bodies of their respective areas and provide feedback to CIFRI if they face any problem in the field while enhancing fisheries in this sector. 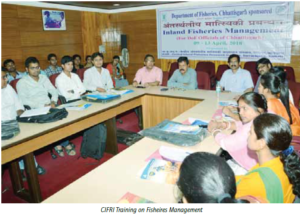 The Society of Aquaculture Professionals (SAP) elected its new President and office bearers for the term 2018-20 at a brief function held at the Raintree Hotel Chennai on the 30th April 2018. Mr. Ravikumar Yellanki, Managing Director, Vaishaki Biomarine (P) Ltd. & Vaishaki Bio-Resources (P) Ltd. was unanimously elected as the President of SAP for the 2 years term. 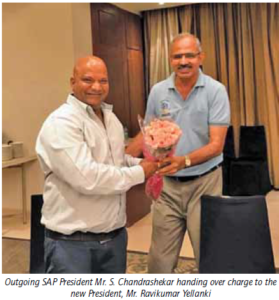 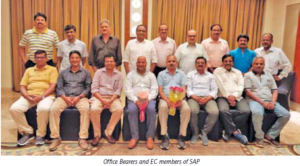 The Society of Aquaculture Professional (SAP) is a non-profit, non-government organization established for and by a group of aquaculture professionals in India in the year 2003, with the major objective among others to
promote the art, science and practice of aquaculture as an important and sustainable technology to produce food as well as to gather and disseminate scientific, technical and other information about aquaculture through
publications, meetings and other forms of communication.

The institute also distributed inputs such as standardized fishing gear, coracles and lifebuoys to the fishermen under Scheduled Tribe Component (STC) plan during the event. The project stressed on the importance of using standardized gillnets for improving fish production. The fishers were also guided on the judicious use of gill nets. They were advised to use two different gear sizes of gillnets, viz., 120 mm and 240 mm for optimum catch and were also asked to use gear size of greater than 110 mm to avoid the fish catch of less than 1 Kg. On site demonstration of the gill nets were also conducted by the institute for the benefit of the fisher participants, belonging to the two states.

The Central Institute of Fisheries Technology (CIFT) organized an awareness programme on Hygenic Fish Vending on 6th March, 2018 at Puducherry. The programme emphasized on the importance of maintaining cleanliness and personal hygiene during fish vending and the role of cleanliness in enhancing the price realized for fish. The beneficiary for the programme mainly included fisherwomen and they were explained about the need for cleanliness at home and work place. The participants were advised to follow the hygienic handling protocol framed by CIFT. 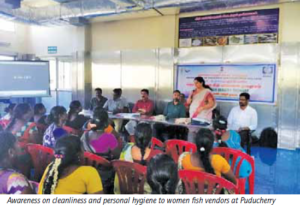 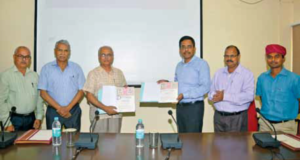 The APFISHTECH-2018’ a seminar to address opportunities and challenges in Indian fisheries and aquaculture with special reference to Andhra Pradesh jointly organized by the Central Institute of Fisheries Technology, Cochin and Society of Fisheries Technologists, (India), SOFT(I), Cochin concluded on 23-24 March, 2018. The seminar was held at Visakhapatnam. Shri V. Padmanabham, President, Seafood Exporters Association of India inaugurated the Seminar and released the Book of Abstracts. The seminar focused on strategies to minimize product cost in the aquaculture sector, need for traceability of antibiotic rejections and as well as education for sustainable growth.

Dr. J.K. Sundaray, Director, ICAR-Central Institute of Freshwater Aquaculture (ICAR-CIFA), the Guest of Honour at the programme emphasized on economical use of water in crop production. He stressed that innovation should not compromise sustainability. He underlined that aquafarmers should lay faith on capable partners in the country and use indigenous technology for economic benefits. 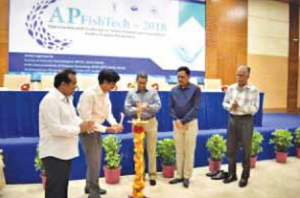 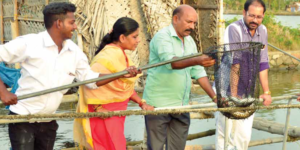 Maharashtra government has sought technical support of the Central Marine Fisheries Research Institute (CMFRI) for venturing into largescale cage fish farming. The state proposed to launch 500 cage fish farming units in the rich
brackishwater resources of the Sindhudurg, a coastal district in Maharashtra. The financial support required for extending technical support would be provided by the Maharashtra Government. The state wanted to emulate
models of cage farming similar to the ones implemented by CMFRI in Pizhala, Ernakulam, Kerala and in the various parts of Mangalore, Karnataka state.

The project promised a better livelihood option for the coastal people of Maharashtra. In addition to the cage fish farming, the Maharashtra government also sought the institute’s guidance to set up backyard hatchery units of cobia and silver pompano and seed production units of the bivalve in the district to boost the farming ventures. 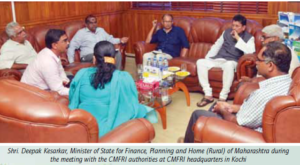 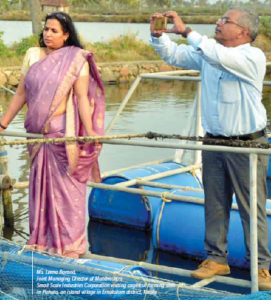 The main objective of the awareness program was to sensitize the stakeholders along the Teesta river belt on the importance of conservation of endangered fish species of the river through participatory or comanagement mode. The event focussed on the need of native fish species of Teesta River in maintaining the river ecosystem health as well as in supporting livelihood of local fishers. It explained about the present status of fish diversity of river Teesta and also about the efficacy study of the fish ladder/pass conducted by CIFRI. Fish ladder/pass in every dam construction is must to ensure the migration of fishes within or across the river. It helps to monitor whether the migratory fishes (especially Neolissochilus hexagonolepis, Chocolate Mahseer, Schizothorax richardsonii and Snow trout, Cyprinion semiplotum, Assamese King Fish) are moving across both the dams in upstream and downstream for spawning, feeding, etc.

The programme was well attended by fishers, fish farmers from Reang, Kalijhora, Kalimpong village, Raninagar, Jalpaiguri villages and members from Himalayan Angling & Conservation Organization, West Bengal. The event sensitized the fishers/anglers on the need to ban fishing/angling during the breeding season and to avoid destructive fishing methods in the river.

The Minister stressed that these projects would enhance the livelihood of fishers family of the area. The projects would be technologically supported and executed by CIFRI, Barrackpore with financial support from Union Ministry and administrative support from line departments of respective states with direct participation of local community.