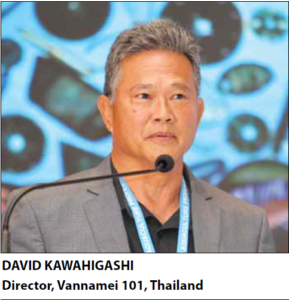 Dr. David Kawahigashi, Director, Vannamei 101, Thailand, made an impressive presentation on ‘Synbiotics… back to the future’ at Aqua India 2018, an international seminar organized by the Society of Aquaculture Professionals, Chennai on 3rd February 2018. His presentation delved on Synbiotics – a practice that involves fermenting Prebiotics (usually Rice Bran) and Probiotics with enzymes and buffers in sterile freshwater and subsequently administering the fermented product directly into ponds or administered in feed. The technique is a lowcost method and employed for improving the pond environment that would help in warding off diseases besides enhancing survival rates of shrimps.

As this concept is widely practiced in several shrimp farming areas in India, at least in part, and realizing the current need of the shrimp farming community to cut down production costs as shrimp prices are at an all-time low, Aquaculture Spectrum brings you highlights from his presentation on Synbiotics, which we feel would be of immense use to our farmer friends.

Enhanced performance observed in shrimp nursery systems in Brazil that adopted Synbiotics systems was highlighted by Dr. David in his presentation. Presenting the results of comparative studies, where Shrimp seeds of similar body weight were stocked at the same stocking density in both Synbiotic and non- Synbiotic nursery systems and reared for a period of 25 days, the efficacy of Synbiotic systems was clearly explained. At the end of the nursery rearing period, it was observed that the shrimp seeds reared in symbiotic system assisted nurseries yielded a better growth of 0.11 gm as against the seeds reared in nurseries without synbiotic system which attained only 0.06 gm. Similarly, a better productivity of 1.3 Kg/m3 biomass against 0.65 Kg/m3 and a better FCR of 0.58 as against 0.98 was obtained in Synbiotic nursery systems. The synbiotics system also had an added advantage in having a 5-7 day period when the pH in the system was maintained without fluctuations. Daily dosage of Fermented Rice Bran (FRB) at a level of 50 ppm i.e., 5 kg/m3 was provided to the nursery tanks in this system.

Dr. David advocated a combination of Synbiotics and recirculation for extensive grow-out systems. Examples of farms in Ecuador and Mexico regions were cited to emphasize the importance of synbiotic systems. The production from these systems ranged from 2.5 to 5 metric tons of vannamei of 30-33 gms size in a culture period of 150 days at a survival rate of 75-85%. The stocking densities in these culture ponds were 20-30 pcs/m2. The ponds were not aerated (zero aeration static ponds) and the maximum daily water exchange maintained was about one percent. Water was however recirculated within the different grow-out ponds (in series) or drawn from all culture ponds separately (in parallel). The water is then subsequently passed through a sedimentation pond before being pumped back into the culture ponds. While the former required batch stocking, the latter afforded staggered stocking but took a longer period to balance water quality and involved higher pumping and energy costs. The symbiotic system employed in shrimp farms in many South American countries involved the fermentation of Rice Bran under anaerobic conditions (without aeration) for a period of 24 hrs with the FRB concoction being mixed/ stirred thrice daily. A dosage of 15 Kgs rice bran per Hectare was then applied to ponds every week (i.e., 6 Kg/acre/week) at an interval of 2-3 days. Dr. David suggested a 24 hour aerobic fermentation regime where rice bran is to be fermented in sterile freshwater with a concoction of probiotics, enzymes and buffers (NaHCO3/CaCO3) to maintain the pH above 6.5. This formula is the key to obtaining better survival rate, faster growth, higher body weights, increased biomass and better FCR with the same density and within the same culture period.

Dr. David suggested the use of Amino Peptide emulsion (AP) where Soy is subjected to a 5 to 7 day anaerobic fermentation (with daily stirring) before being administered in feed. Protein (from soy) when fermented, converts to amino acids and peptides, which are known to have antimicrobial properties as well as immunomodulatory functions. 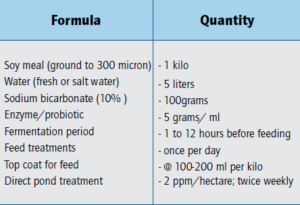 Aqua mimicry is a concept where natural estuarine conditions are simulated in culture ponds. This is facilitated by establishing zooplankton blooms (mainly copepods) and beneficial bacterial population to improve and maintain water quality. The plankton serves as supplemental feed to the cultured organisms. This is usually done by fermenting a carbon source, such as rice bran, with probiotics and applying to the pond.

Dr. David suggested achieving the same through a combination of the methods elaborated above; Mineralizing the pond bottom with enzymes and FRB water Treatment, both before stocking and regularly after stocking, use of Amino peptides on feed as well as regular chain or rope dragging (Chain for earthen ponds and rope for lined ponds) on the pond bottom once/twice a week which helps in breaking up the biofilm on the pond bottom and facilitates diatom development. Use of Shrimp toilets/ central drainage systems would also assist in flushing out pond waste with minimal water exchange.

This practice would facilitate the maintenance of stable water quality parameters including pH, assists in keeping a balanced C : N Ratio and also to keep pathogens and diseases such as White faeces at bay.

Dr. David suggested using Fermented Sweet Potato as a water treatment method in Shrimp hatcheries and as a Vibrio control tool in shrimp larviculture. This technique had been effective in enhancing the survival rates in Shrimp hatcheries in Mexico from 55% to 75%, in Brazil from 35% to 45% and in Ecuador from 0-50% to 55-75%. Vibrio loads were comparatively lower in tanks that used Fermented sweet potato when compared to tanks that used only probiotics. Post larvae produced from these systems were also comparatively more active and larger than the ones produced in normal systems, Dr. David added. 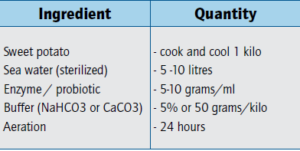 A Synbiotics system on the other hand would be easier to manage, as organic loads were low, needed lesser water exchange and assured better FCRs. Achieving cost efficiency in production and sustainability are the main challenges in going forward in the shrimp farming sector and the use of technique such as Synbiotics, Genetics and System design are the major solutions to address them. Synbiotics remains as a long-term and sustainable solution that every farmer or hatchery/nursery operator can implement.