Freshwater fish production from India has been dominated by carps, which contributes close to 80%, equivalent to 4.38 million t annually. The carps enjoy a prime position in the Indian aquaculture scenario owing to their fast growth and good market value. These highly popular food fish attain marketable size of 800–1000 g in less than a year and are generally propagated on extensive and/or intensive scale in a polyculture system. The Indian Major Carps (IMCs) such as rohu (Labeo rohita) and catla (Catla catla) though originally the inhabitants of the Ganga river network in North India and the rivers of Pakistan, Bangladesh and Myanmar, are transplanted into other rivers in central as well as peninsular India and also in aquaculture systems of Nepal and Sri Lanka. However, it has been observed that the growth of these species is often affected in the grow-out culture phase due to poor quality of seeds used for culture, thereby decreasing the profitability in carp farming. 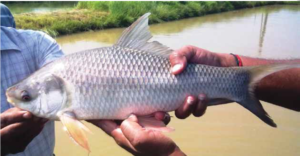 Hybrid of catla and rohu

Seed quality is compromised in many hatcheries where the breeders of catla and rohu are kept in the same tank for breeding, resulting in production of hybrid seeds. This poses a serious threat to the aquatic environment biodiversity as interspecific fish hybrids can cause genetic risks in natural and cultivated fish populations.

Morphological identification of these hybrids, particularly in the early stage is practically not possible. But, genetic monitoring of cultured fish can be implemented which helps to unambiguously identify parental lineage and their probable hybrids.

Hybridization and its implications in carp culture

Hybridization technique was used by aquaculturists in the hope of producing aquatic organisms with specific desirable traits or general improvement in performance. Intergeneric and interspecific hybridization programs have been applied in fish farms with the purpose of producing animals that perform better than the parental species (hybrid vigor). There have been numerous studies on hybridization of fishes and certainly not all of the hybrids reported contribute to commercial aquaculture production.

Natural occurrence of both interspecific and intergeneric hybrids of IMCs has been reported mostly from reservoirs and other natural ecosystems. Several interspecific and intergeneric hybrids of IMCs: C. catla, L. rohita, mrigal (Cirrhinus mrigala) and kalbasu (Labeo calbasu) and those of IMCs with exotic carps viz. common carp (Cyprinus carpio) and silver carp (Ctenopharyngodon idella) have been artificially produced through hypophysation technique. These hybrids were not popular due to poor survival among some undesired traits exhibited by them. Further, many species are jeopardized by hybridization and genetic introgression, and hence are a source of potential threat to the diversity of freshwater fish particularly when the hybrids are fertile. They may also compete in several ways with the native parental lineages. Further, in the long run it would lead to a scenario where pure strains of carps become extinct.

Production of hybrid seeds in carp hatcheries and limitations in identification

There seems to be misunderstanding regarding culture of mixed species for composite fish culture with mixed breeding of carps by the hatchery managers and the fish farmers. When the farmers are demanding mixed seeds (mixture of pure rohu and catla), the hatchery managers are mixing the spawners to produce hybrids. This improper breeding and mixed spawning causes inadvertent hybridization and is likely to affect the genetic pool of the prized food fishes badly.

Conversely, to make more profit, hatchery managers’ practice mixed breeding program in hatcheries when there is paucity of either male or female brood fish of desired species, and to save space. This practice has been rampant in many parts of the Indian subcontinent. Unlike other agricultural crops and domestic land animals, the hybrids do not normally perform better than their native natural parents, showing only low heterosis effect. Among the three IMCs, catla and rohu are generally chosen for freshwater aquaculture due to their faster growth and greater demand.

Quality seed is a fundamental pre-requisite for sustainable and successful aquaculture, be it small-scale or commercial farming. Inadequate supply of quality seed is often cited as a major constraint for aquaculture in many parts of the world. The issue of quality comes to the attention of producers only after a certain period of time when performance indicators (e.g. growth, production, survival and disease) consistently manifest seed quality. Factors which contribute to production of poor quality seed would have become established as a normal practice in the system. Taking the advantage of seed demand of these two species, many hatchery owners and seed producers supply hybrid seed of these two species (catla x rohu or rohu x catla) in the name of either pure rohu or catla during the young stages. These hybrids cannot be easily differentiated from each other morphologically at early stages of development e.g. spawn and early fry stages.

Accurate identification of hybrids is thus important not only for sustainable aquaculture development, guiding aquaculture domestication efforts, assessing aquaculture production, and identifying useful crosses, but also to allow for a better understanding of biodiversity issues. It would be unfortunate to experience widespread loss of pure species in aquaculture as happened with tilapia as a result of widespread introduction and subsequent hybridization. Morphological differences of hybrids with their parents, particularly in the initial life stages are only minor and need close examination by experienced workers, and it is difficult to verify the genuine hybrids from interspecific hybridization. Many times fish farmers get cheated by unethical practices by hatchery owners as they sell these hybrids in the name of pure rohu or catla seed. At that point of time it is almost impossible for the farmers to recognize the differences. After nursery rearing, poor survival and growth of these seeds becomes a bane for them. Even though they approach the Fisheries Officials for law enforcement, they also feel helpless in the absence of a genuine identification method at this early stage. Molecular techniques have been applied in the worldwide aquaculture, allowing for an adequate management of several cultivated species and providing a huge number of molecular markers that have been applied successfully for hybrid identification and detecting genetic introgression in fish. Multiplex-PCR strategy has proved to be efficient methodology that could be quickly and inexpensively executed, which would allow diagnoses through simple PCR based upon single nucleotide polymorphisms. However, they have rarely been used in the characterization of hybrids.

Scientists at CIFA made an attempt to develop a novel multiplex PCR based approach for the identification of seeds of rohu and catla and their hybrids (parents and hybrids) using a house keeping nuclear gene.The advantage of multiplex-PCR is that it does not require the additional step of restriction enzyme digestion, which can eliminate any post-PCR analyses as well as additional time and costs. On the other hand, there can be limitations to the primer designs that should be taken into consideration, where they mainly reflect the ability of the primers to have good specificity and reliability in the application. 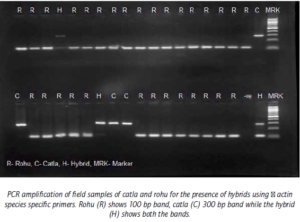 The products obtained through a multiplex PCR using 25ng of genomic DNA and 10pM of each primers and standardized thermal conditions when run in a gel, yield a banding pattern of single specific band at 100 bp size for rohu and a band at 300 bp size for catla whereas two bands both at 100 and 300 bp for hybrids. The hybrid identification kit, which can identify a catla-rohu reciprocal hybrid in early stages in just two steps with genomic DNA as starting material, would be handy for those producers and buyers for screening of quality seeds and moreover it would be a stepping stone for seed certification programs for both government and private hatcheries. The kit has received a provisional Indian patent, # 343/ KOL/2013 of 26.3.2013. There is scope for automation of this technique which would facilitate on-spot rapid identification of hybrid carp.

Validation of the kit:

For the validation of the developed kit a total number of 685 hatchery samples from different places of Odisha, Gujarat, Bihar and West Bengal were screened which revealed that out of them 191 (27.8 %) were hybrids. This is matter of concern. Since the kit also amplifies back cross hybrid resulting from mating of F1 hybrid and the parental species, it would facilitate to monitor the introgression of these hybrids with their parental species. West Bengal, which is considered as the “seed capital” from where maximum quantity of carp seed are distributed to various parts of the country showed highest incidence of hybridization, 68.5%. Presence of hybrid seed (spawn/hatchling and fry) in the hatchery population from four states of India. Samples were collected and tested using the species specific designed primers with the same thermal cycler condition 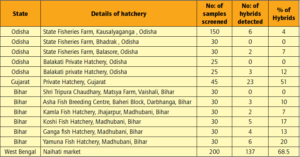