In this issue, we focus on ‘Angels’ or otherwise known as Angelfish. These are one of the most popular aquarium fish and a favourite among hobbyists. Angelfish earned their name because of their shape; their fins resemble angel wings and when turned head-down, appear to have a silhouette of an angel! These fish have a majestic and impressive appearance that certainly adds a lot of grace and beauty to an aquarium.

Angelfish belong to the family Cichilidae. The most commonly kept freshwater aquarium angel fish is known by the scientific name Pterophyllum scalare. The generic name “Pterophyllum” is derived from the Greek word which means ‘winged leaf’ while the species name “scalare” means-like a flight of stairs that refers to the dorsal fin of the fish. All Pterophyllum species, originate from South American freshwater rivers and tributaries such as the Amazon basin and Guyana River where the water bodies have densely overgrown aquatic plants. Thick aquatic vegetation is the most preferred niche by the angelfish. Broad leafed aquatic plants provide more space for the fish to lay their eggs. 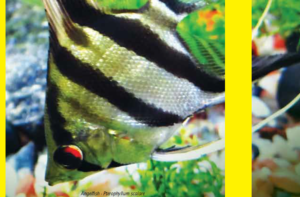 The Angelfish has a laterally compressed, flat, upright disc-like body. It looks like a disc on edge with long dorsal and ventral fins. The long fins protrude from the top and bottom and possess two feelers in front of the anal fin. The pectoral fins are long and the tail is spread wide giving a leafy appearance. Today there are short finned and long finned varieties of angel fish. The tail is vertically oriented and has a shovel-like shape to long and short depending upon the variety. The fish has three vertical bands on the body and fins, thinner and paler bars are spaced between the vertical bands. The maximum size the fish attains is 6 inches but this size is seldom obtained in Aquarium tanks. 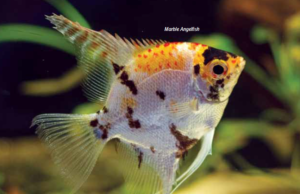 The ideal water quality for Angel is slightly acidic soft water with a pH of 6.8 and the preferred water temperature is around 26-270C. The fish is carnivorous but can survive on artificial food such as flake diets. Live feed such as blood worms or brine shrimp and mosquito larvae are also well accepted.

Angels has interesting long term relationships where each individual will protect the other from threats and enemies. In the event of death or removal of one of the mated pair, angel fish breeders have experienced both the total refusal of the remaining mate to pair up with any other angelfish and successful breeding with subsequent mates. The fish attains maturity at the age of 6 to 12 months.

When ready to spawn, angels choose an appropriate medium (a broad leaf or a pipe or even the glass sides of an aquarium) to lay the eggs, and spend one to two days picking off detritus and algae from the surface. The eggs are then deposited in a line by the female fish on the spawning substrate, and allow the males to fertilize them. Both the parents take turns to keep watch at the eggs until they hatch.

In a few days, the eggs hatch and the fry remain attached to the spawning substrate for a week. Remains of the yolk sac are used as the food by the fry during this period. The fry later develops into a free swimming small fish.

Angelfish was introduced in the US market during the 1940s and then to Europe, though it was described as early as 1840. More than twenty-five varieties of Angels, which have been developed through cross breeding of P. scalare and P. eimekei, are available in the market today with unique colour patterns. They were bred selectively to establish the new strains. They are single coloured ones like black, silver and gold and colour patterned ones such as leopard, striped or zebra and lace-like, mottled or marble, half black etc. Black veil tail, diamond, ghost, blushing, golden marble, pearl scale and koie are the other popular varieties in Asia. 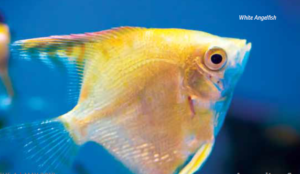 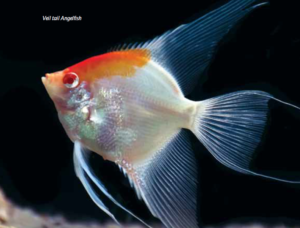 The colour of the Black Angelfish is solid black while the Silver is the normal colour of wild Angel. The fish has four dark vertical bars running through a white body, the first passes through the eye, the second in front of the top and bottom fin, the third through the top and bottom fin while the fourth at the beginning of the tail fin. Some angels have black speckles over the anterior portion of the body. The colour of the golden Angels may vary from solid white to golden colour without other markings, over the head and back area with a mantle of gold.

Zebra Angelfish have more vertical stripes which continue on right through the tail, while Half Black Angels are white in front and the black cuts right through the top and bottom fins right through the tail. The Black Lace angels are almost like the solid black variety. The only difference being the intensity of colour especially on the fins where one can notice a frilly or lace like effect. Veiltail Angels have elongated fin and this could be in all colour varieties depending on the selection of breeding. Blushing Angels have red cheek area without any pattern on the white body while Pearl Scale Angels have rough looking scales which are in different colour varieties.